Where Did Winter Go?

Six in the morning should be one of the coldest times of the day.  But at 6am today it was already 22C/72F in Hong Kong.   Granted I live and work in the one of the hotter parts of the city - not far from Causeway Bay, a packed shopping district that some locals liken to Tokyo's Shinjuku.  I Just one day after the 20 March Spring equinox and its already hot and humid and it feels like Summer.

Hong Kong barely had a winter this year.  I hardly used my two electric heaters, many nights my nice think down comforter was kicked to the side, and my very nice sweaters stayed in the closet.

And its not just the air temperature. I like to swim at Hong Kong's beaches throughout the year and noticed that the water temperature never really got to a level that made me shiver.  In the past I could feel a whole-body tingly sensation during the first 200m in cold water.   It never happened this year.


"China has become the fifth largest exporter of major conventional arms worldwide, according to new data on international arms transfers published today by SIPRI. This is the first time China has been in the top five arms exporters since the end of the cold war. Overall, the volume of international transfers of major conventional weapons grew by 17 per cent between 2003–2007 and 2008–12."

"‘China’s rise has been driven primarily by large-scale arms acquisitions by Pakistan,’ said Dr Paul Holtom, Director of the SIPRI Arms Transfers Programme. ‘However, a number of recent deals indicate that China is establishing itself as a significant arms supplier to a growing number of important recipient states.’"

US - Rich Getting Richer

Thanks for Mebane Faber for passing on the graph below. 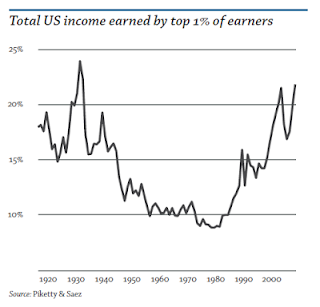 Some interesting - actually disturbing - figures on the size and activities of JP Morgan that were released by the US Senate Permanent Subcommittee on Investigations.  They are due to release their full report this Friday 15 March.

- JP Morgan's balance sheet is one-ninth the size of the US economy.
- The company has paid more than US$8.5b in settlements for regulator and legal problems.  This is 12% of net income the bank generated between 2009-2012.
- "JPM’s ability to retain its reputation, its political power and support of investors in the face of financials that lack the details necessary for a proper analysis are reminiscent of another too-big-to-fail institution: Fannie Mae."

Sign of the Times: US Citizenship Renunciation Category Added at Hong Kong Consulate

Sometime in the not-too-distant-past the US Consulate in Hong Kong added and new category to its fee schedule.   Costing US$450, 'Renunciation of U.S. Citizenship' is the most expensive of the seven passport related services they perform.

A few years ago I read that many Hong Kong based US citizens were giving it up in advance of stringent new tax and reporting laws.   As I understand it, except for North Korea, the US is the only country that taxes its non-resident citizens' income. 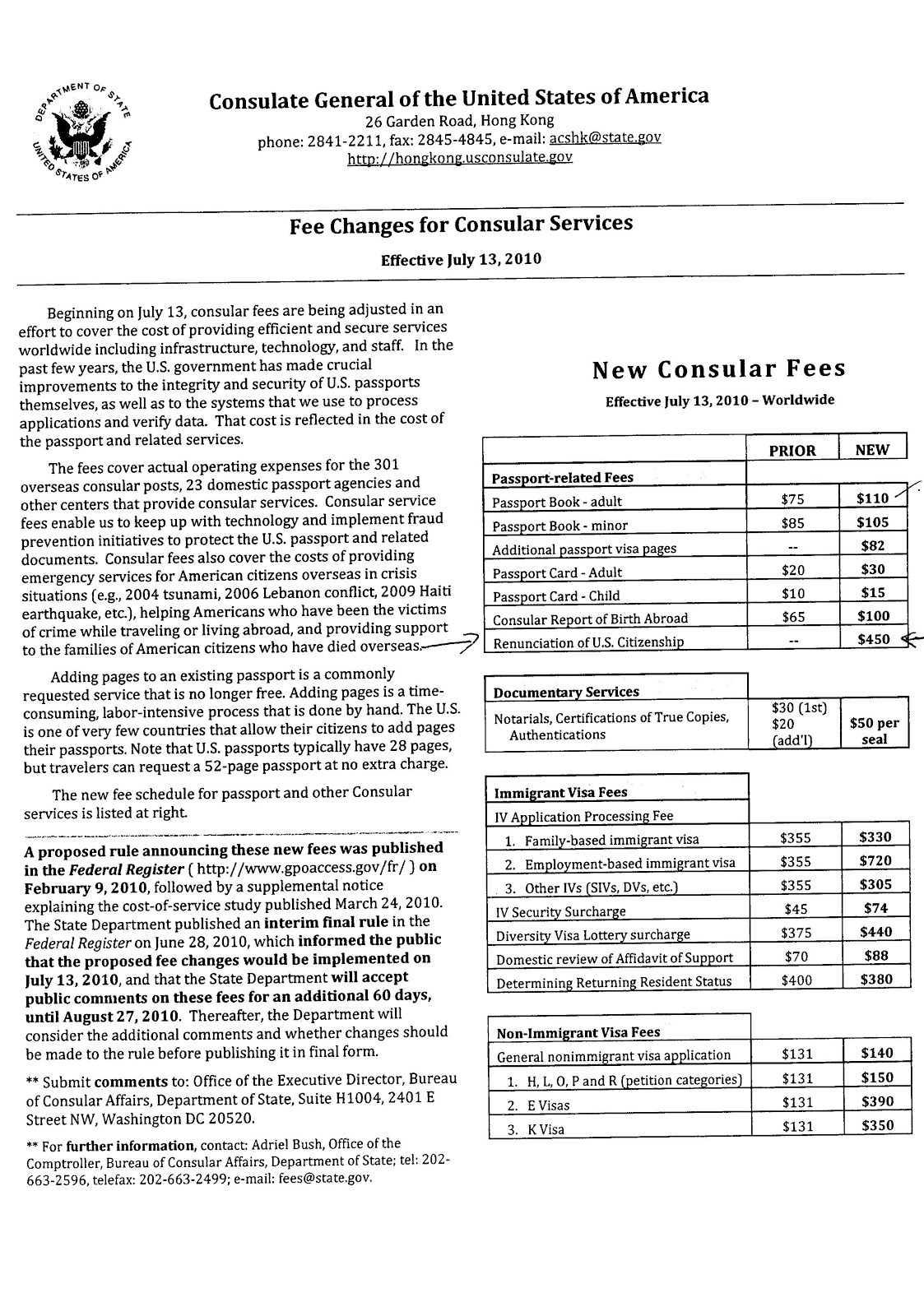 I've met two people in HK who have renounced their US citizenship.  One is a born and bred white American.  He is now a PRC citizen and hold a Hong Kong passport.  The other is from Belgium and spent something like 20+ years in the US before moving to Hong Kong several years ago.  He now holds an EU passport.  Many American citizens I've met and know - both ethnic Chinese as well as other races - that I've met have at least contemplated giving up US citizenship.

In another sign-of-the-times, the consulate is now charging for adding new pages to a passport.  It was previously free.  And at US$82 the 'increase' is very steep, and not much less than getting an entire new passport.

I've heard from several sources that returns from private equity (PE) funds investing in Asia, and their fund-of-funds equivalents, have had poor returns.

At the same time, many family owned and controlled conglomerates in Asia are criticized for 'asset-trading', which sounds like PE-type investment strategy.

My question is the following: what if one viewed, invested and valued Asian conglomerates like a PE alternative rather than an operating company?

This would involve not just looking at current business lines but also the conglomerate's investment track record.  Instead of evaluating the CEO/Chairman as an operator, perhaps look at the group's long-term investment returns and prospects, and how much of this is distributed to minority investors.  As compared with PE investments investors in listed companies have a timing advantage and an information advantage as the investor can buy when shares overshoot on the downside (late 1998/early 1999), and company insiders need to disclose when they buy and sell shares.

Conglomerates retain optionality. A key advantage for conglomerates is retaining the option of when to sell. Unlike PE funds, conglomerates are not subject to exiting their investments in a predetermined time period, which is typically 7-10 years for PE funds.

Thus the PE fund is giving up the option to hold its investments past the life of the fund. To raise the next fund, there is a powerful incentive for managers to realize capital gains quickly rather than holding on for a higher value.  Forced, or pressured selling, is not a very good way to get top dollar.  (This is not my thinking but rather from reading a study on the subject as part of the CAIA program.  But logically this makes sense).

Asian markets tend to be more volatile than those in the US so putting a time-frame on selling could lead to additional diminished returns for Asian PE investors.

Options have value and PE fund managers are under pressure - internally and externally - to give up this option.

People like Li Ka-shing and his Cheung Kong Holdings, as well as many other family-run conglomerates, have done very well by retaining and acting on this 'option' at the right time.  (It has also been written that Li Ka-shing very rarely losses money when he buys shares in companies he controls.  I suspect, but don't know, that this is the case for similar insiders).

Operating Knowledge.  Another advantage is inside operating knowledge.  Most Asian conglomerates focus on one or two key business lines with a healthy dose of property somewhere in the mix.  This likely means they have insiders' knowledge when investing in a competing or complimentary business. This may give them an advantage over a PE fund which are more than likely more interested in the financial returns only rather than strategic, longer-term returns.

This can be is different then Silicon Valley and the US where many funds are started by ex-entrepreneurs and/or businessmen.  In Asia, most PE funds are started and staffed by bankers and financial types, rather than operators.  This puts them at a disadvantage in many instances.  Conglomerates thus may have an edge in buying and building businesses.

There are a lot of risks to investing in Asia-based conglomerates.  Taking money out of the listco via negative transfer pricing; long-term operational pump-and-dumps; selling and buying assets from the parent; valuation difficulties from multiple business lines, lack of business line concentration, replication of fund manager's diversification, etc.

But at the same time, there could be several unrecognized - and therefore likely undervalued - embedded options in the conglomerate that investors can ultimately benefit from.

‘Jazz buffet’ is how a friend put it, and that pretty much summed up the 9th Java Jazz Festival in Jakarta.  Taking place in the first three days of March, the festival packed in 180 performances on 17 stages.  It highlighted Western jazz and pop stars such as Bob James, Stanley Clark and Lisa Stansfield as well as Indonesian favourites such as Dwiki Dharmawan, Oddie Agam and Ran.
The festival’s open format worked well.   Daily and 3-day passes allowed access to almost all performances, except the four special performances which cost extra.
Like a good buffet, one could literally walk in and sample musical performances from some of the world’s and Indonesian finest musicians, stay a bit and nibble or move on an try something new. In some cases the stages were literally next to each other with one band performing while the other was setting up next door. Being Indonesia, one of the more rhythmically inclined Asian countries, the bass and drums seemed to be mixed on the high side, which I liked, but tough on the ears after three, eight-hour full-on days.
The lack of international sponsors gave it a more local feel.  Noticeably absent were Coke, Pepsi and almost all Western brands except for two small stalls selling booze, Heineken and Jack Daniels.  These were sparsely populated as about 90% of Indonesians are Muslim.
But there were plenty of Indonesian ones to keep fill up the sponsorship list.  Event sponsor, cigarette maker Djarum, plastered the venue with its brand name, advertisements, and identically clad saleswomen/models.  Indonesian household names such as Tehbotol (sugary ice-tea beverage), BNI (large bank) and Telkomsel (large Telcom) and many others battled for our attention.
Like a good buffet hard choices had to be made.   This included having to choose between Spyro Gyra, Kenny Garrett and the special-performance of Joss Stone who were literally playing at the same time on the first night.  I went to the latter having already paid for a ticket, only to leave about a third of the way into it to check out other performances. I had been spoiled earlier in the evening by local power pop band Ran who gave an amazing performance that had the hijab covered honeys yelling and swooning, and Jimmy Cliff who at some 65 years old high stepped his way to some of his classics.
Some of the highlights of the show included hearing the same Jimmy Cliff doing the Partridge Family theme song, George Duke and Stanley Clark cover a Parliament-Funkadelic tune and incredible musicianship from Spyro Gyra’s drummer and bassist.
Perhaps the best part of the festival was sampling newer acts - or at least new to me.  Kaori Kobayashi from Japan plays some serious sax despite here ‘kawai’ appearance and mannerisms; Maurice Brown from Louisiana brought down the house with his trumpet playing; and Jamaican Cafe, who are from Indonesian and were not listed on the program, gave an amazing acapella performance in-between acts.  Other notables  were Louisiana’s brass/soul/funk band Soul Rebels, California’s beatbox expert Butterscotch and Indoneia’s soulful The ExtraLarge. There were also numerous impromptu bands and performances.  One of the most memorable was stumbling on a latin jazz jam session in which the spectator in front of me took over one of the four drum sets and started leading the session.
While the festival was all-in-all very good, I did have some peeves.  The major one being the closeness of the venues meant that sound from one venue tended to draft into another.  Also, being addicted, I missed easy access to Diet Coke, my drug-of-choice.
But this is not to detract from the great music and time. The festival was very well organised.  Shows by-and-large started on time.  The venues were clean and the sound was very good.  Despite the tobacco company sponsorship there were few people smoking.
All-in-all it was a great festival and something that I’ll make an effort for in the future.