A week-long summer reunion got me thinking once again about how to best explain what I do to my more academically-inclined family.  “It sounds like you’re trying to figure out what will go up and what will go down. Don’t you get bored with that?” is the way my very wise mother summed up my profession/obsession with stocks.

Ultimately my goal is to help people invest wisely which means I first have to convince others that equities make sense.  A good place to start with is my skeptical family.

Like many, one of their biggest direct investments was a second property.  It did not work out well from what I remember.

Property is often seen as a safer investment than stocks.  But is it a better investment?

My example takes this post back to Asia - my home and center of attention for most of the last thirty years.

In the last 15 years property in Taiwan has been a very good investment with prices rising almost three times, according to one of the most followed property indexes in Taiwan, the Sinyi Taiwan Housing Price Index (link here).

The index is provided by Sinyi Reality Inc., one of Taiwan’s largest real estate brokers with an estimated 7.7% market share as of June 2015. [1] Sinyi was founded in 1987 and listed via IPO in Taiwan in 2001.

Since March 2001 Sinyi’s price has increased by 1209%.  It was a volatile ride as seen in the chart below, but investing in a company that provides real estate services was a better investment than real property [2].

Investing in bricks and mortar is fine, but trails the innovation, hard work, and intelligence of the 4,085 people that Sinyi employed at the end of 2014. [3]

However the return from the market overall was not so good.  Over the same period the Taiex, the main index followed in Taiwan, rose by only 69%.  Stock selection matters as I've written about before (see here). 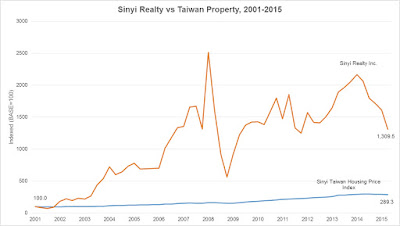 Robert Shiller, a famous US economist and one of the few who warned that US property was expensive before the 2008 bubble burst, was also one of the first to compile long-term data on housing prices.

This includes reinvested dividends so the comparison is not apples-to-apples. Assuming dividends and their growth account for half that gain, the long-term return from US equities is almost 5 times more than that of US property.

And what are businesses?  Fundamentally they are a collection of people and things that do something to help other people.  Those other people buy the stuff or service that these companies make.  If the business is adding value it makes a profit.  If more people want to buy that stuff in the future the business will grow.

Notice how often the word ‘people’ appears in the previous paragraph.  What I like about businesses – and why I believe equities outperform other asset classes – is that business is all about people.  And we humans are wonderfully complex, imaginative and progressive creatures.

The stuff we do simply amazes me.  The diver that scores the perfect 10s. The invention of the Internet and integrated chips. The discovery of a new medicine that cures a disease that was once considered unbeatable.

Think of how we live more interesting and efficient lives because of Apple’s innovations.  Think of how many people in the world have one or several integrated circuits in their cars, handbags and pockets that were made at TSMC or UMC's plants.  Think of the savings in time and convenience because of the MTR Corp.’s trains.  None of these companies were around when I was born.  They are now part of millions of people’s daily lives and are all multi-billion dollar companies.

It is totally big picture, but investing in companies is like investing in man/womankind’s incredible ability to innovate. Human beings are amazing and many listed companies are big and famous now because they provide a superior product or service.


[1] Prices have risen so fast that, according to the Global Property Guide, property in Taipei has some of world’s lowest rental yields. It is also one of the world’s least affordable places to buy with a price to income ratio of 8.4x, more than double than Japan which has a price to income ratio of 4x.  In short, Taiwan’s property rise may still have a way to go, but after such a good run, large future price increases are unlikely.
[2] Note that we’ve left out stock dividends and property rentals from our calculations
[3] As per Sinyi Realty Inc annual report
[4] Irrational Exuberance; 2nd Edition, Robert Shiller
[5] Credit Suisse Global Investment Returns Yearbook 2015
Posted by Michael McGaughy / 麥德安 at 10:49 PM 1 comment: