Breaking Bad's first episode hooked me, and I've been a fan since. Great script, acting, story-line, cinematography, etc.  I never thought I'd be so enamored by such a depressing subject.  The series last episodes are currently airing in the US and I'm looking forward to them.

Breaking Bad is a US cable television series of a mild-mannered high school chemistry teacher's transformation into a regional drug kingpin.  The protagonists Walter White has a teenage son with cerebral palsy, a daughter on the way, and is diagnosed with cancer.  He starts 'cooking meth' to pay for his cancer treatments. Many twists and turns later, Walter White by luck and skill eventually becomes the largest crystal meth producer and dealer in the South Western USA.

But Walter White is chump change, a small fry, and a petty thief compared to the real-life William Jardine.

As far as I can tell William Jardine, and the company he co-founded, Jardine Matheson, was the largest and most organized drug dealer the world has ever seen.  His drive to expand the opium trade up the China coast and his active lobbying for what is now called the Opium Wars, eventually led to an estimated 70% of adult males in China becoming users or addicts.

At least this is the conclusion I came to when researching the origins and history of the Jardine Group for an investment bank report.  Called Inside Corporate ASEAN, the report looked at the largest conglomerates and controlling shareholder groupings in South-East Asia.  Much of the salacious stuff about Jardine's early history was edited of rough drafts I submitted to the bank. But the stories remain with me.

The two men had similar upbringings.  Like Breaking Bad's main character Walter White, William Jardine came from a humble, yet educated background.  A graduate of University of Edinburgh's medical school, he learned about the opium trade as a ship's doctor in the East India Company.

Like Walter White, William Jardine was a hard working and 'honest' man.  William Jardine had a Calvinist upbringing, was described as hating idleness, and not fond of rest or recreation. Both men did not use their own products, and looked down on those who take narcotics.

However, unlike the Breaking Bad protagonist, William Jardine was not a devoted family man.  He met his eventual business partner, James Matheson at a Macao brothel and never married.  The two were in the drug trade not to provide for their families or to pay for medical bills, but simply to make money.  "Both men were committed to making a fortune as quickly as possible, the future credo of the opium trade generally", wrote Thomoas Dormandy in his fantastic book, Opium.

In fact, William Jardine was more akin to Walter White's nemesis, Gustavo Fring.  Both innovated product distribution and thought big.   Instead of only selling in Southern China, which was already fairly saturated when he arrived in the 1820s, William sailed up the China coast opening new markets as far North as Tianjin.  His innovation and hard work paid off and by the mid-1830's Jardine Matheson was largest opium trader in China, and likely the world.

But this was not enough. Toward his retirement, William Jardine returned to England and helped persuade the British government to send troops to  southern China to defend free trade there.  He advised the British naval forces on the best strategies to use along the coast and Yangtze River.

His prewar efforts partially led to the Opium Wars and the 1842 China Treaty of Nanking. The treaty ceded Hong Kong Island to the British, opened several ports to foreign trade, and had the Chinese government pay for the war.  A key reason for England's quick and easy victories during the first and subsequent was that many Chinese soldiers were opium users and not prepared or disciplined to fight the more mechanized British troops.


William Jardine died in 1843 in England.  His company Jardine Matheson soon left the opium trade having diversified into other businesses.

However opium use kept expanding. "In 1888 The London Times estimated that 70% of the adult males in China were habituated or addicted.  Two years later, exhausted by futile protests, the fifteen-year-old emperor, under the thumb of his great-aunt, the Dowager Empress Cixi, former prostitute, imperial concubine, serial murderess and lifelong (opium) addict, revoked all laws against cultivation, trading and consumption.  The laws had been so widely ignored that their revocation barely made a ripple."(also from Opium, by Thomas Dormandy).

Let's see Walter White top that in the remaining episodes...

Jardine is now one of the largest non-government controlled conglomerates in SE Asia by market value.  In Fall 2011, when the report was published, it accounted for 11% of large company market capitalization of the six ASEAN markets.  It is the second largest  business group in Singapore as well as Indonesia, and by far the largest non-government owned one in the entire region. Jardine controlled companies accounted for 16% the Straits Times Index, Singapore's most quoted and benched marked equity index. 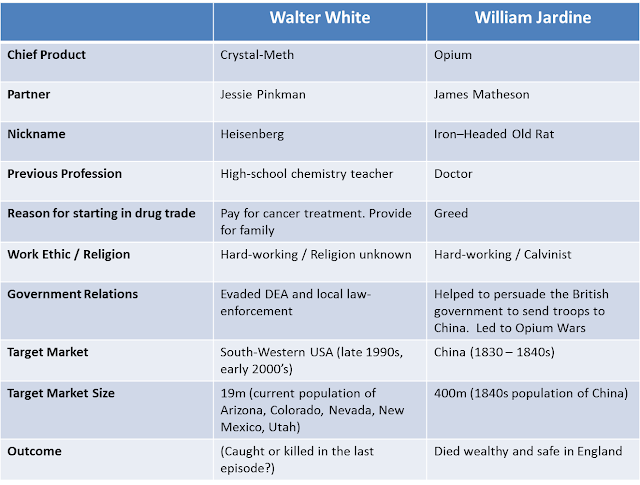