Cut Out the Middle. People = Equity

I am still searching for ways to best explain the philosophy behind my ‘group’ research and why it is important.  My research starts with looking at the background and history of the controlling shareholders, as well as all the companies he/she/it controls.  I do as much research on the listed and unlisted companies and spend as much time on the non-core businesses as the core businesses.

There are likely many different ways to explain what I do depending on the listener’s background.

My last post was written for financial professionals.  In that article I introduced two expressions – “research beta” and “research alpha”.  I contrasted the type of research used to generate consensus earnings forecasts – ”research beta” – with the more background, people and structure focused research that I emphasize – “research alpha’ (See: http://michaelmcgaughy.blogspot.hk/2013/04/research-alpha-and-research-beta.html).

After posting this, I thought of another, non-investment-jargon way of explaining the philosophy behind what I do. Here goes….

Firstly, it has been written many times before that business is about people.  The equation can be written: "people = business".

Cut ‘business’ out of the middle and we are left with a direct link between people and equity.   Or rewritten: "people = equity".  Equity is about investing in people.

From this simple equation it becomes clear that equity investors should evaluate the people behind the business’ they own.  However this is rarely done for listed companies.  When was the last time you’ve seen a research report with an objective or even critical assessment of the key family, people or entity that controls a listed company?

Visiting and meeting management is different than objectively evaluating their background and history.  It is a good information point, but a meeting or two does not replace looking at someone’s past actions and background.  Bernie Ebbers (Worldcom) and Eka Tjipta Widjaja (Asia Pulp and Paper) likely charmed the socks off many corporate and investment bankers while building their companies.  At the end of the day they were behind two of the largest corporate defaults before the 2008 meltdown.

I would also argue that people are more important in emerging markets where the legal system, regulatory agencies, and business infrastructure is not as entrenched as in more developed countries.

In my experience more emphasis and attention is placed on people in South East Asia, the Indian-subcontinent, and greater China than in the West. In most developed Western countries the emphasis is comparatively more focused on institutions and rules.

Another reason as to why people are more relatively more important in Asian and emerging markets is that many of the largest listed companies are relatively young; they are typically majority owned by their founders and their descendants, and are tightly controlled by the founding family.   Think of Li-Ka Shing and his Cheung Kong group, the Lim family’s Genting group, or Guo Guangcheng’s Fosun International group.

Luckily there is a lot of publicly available information about most ‘tycoons’.  In many Asian countries wealthy tycoons get as much press coverage as rock and movie stars do in the US and Europe.

There is also a wealth of publicly available data as reporting requirements have increased in most Asian and other markets in the last three decades.  Insider buy-and-sell data can be important trading signals.  Related party transactions provide a window into the tycoons’ non-listed businesses.

Even in the West individuals are important.  Think about Steve Jobs and Apple.  His history as an innovator, businessman and marketing guru were well known when he returned to Apple in 1996.  Betting on him and his background turned out to be of the better investments of all time with Apple's share price increasing from its 1996 range of US$4.50 - US$8.50, to over US$700 in 2012.

People also impart their culture and values on the companies they lead. This can be especially true of the founders.  This initial corporate culture can take a life of its own with older employees reinforcing existing culture and corporate history to newer ones; or only hiring new employees that fit-in. One of my favorite examples is Astra International, which was started by the very honorable Soeradjaya family.  It remains one of the best-managed companies in Indonesia despite the founders having sold their stake over 15 years ago.

Research also bears this out.  I forget the exact reports I read, and I may be rusty on the numbers, however I remember several stating that share prices decline by something like 50% on average within five years of the founder’s death.  (Apple shareholders take note?)

People are important in every occupation, but especially in business.  Decisions have to be made and people are behind each and every one of these decisions.  Understanding the business from the controlling owners' perspective is something that is overlooked by many analysts and should be emphasized more. 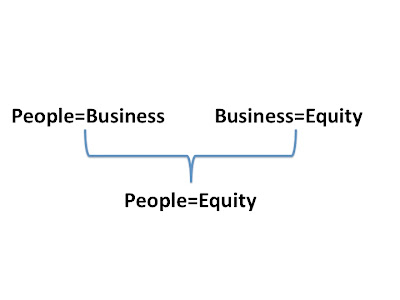 I've been researching and writing about Asian conglomerates and business groups off-and-on since 1990.  In the last two years I've started to look at the price performance of companies controlled by 'good' vs, 'not so good' corporate owners.  What is clear is that buying quality at a good price has been a very good strategy.

I'm not the first, nor will I be the last, to make this observation. However my methodology of separating good from bad may be unique.  I've found that the group research methodology I've been using is a fast way (or not too slow way) to weed out the 'not so good', from the 'good'.

I'm also currently in the process of expanding the work I've been doing on business groups and corporate backgrounds in Asia.  The goal is to get more clients to look at this.  As such I need to better explain what I do and why it adds value.

One way to explain this is to separate investment research into ‘Research Alpha' and ‘Research Beta'.

'Research Beta' I define as that which what is done by most sell-side analysts.  Sell-side research is very much focused on trying to accurately predict next quarter's profit and EPS.  Analysts typically decide if they will be above or below consensus earnings forecasts.  Once done these forecasts get factored into the very same consensus earnings forecasts that was used as benchmark.  These are then compiled by all the main data providers and are likely quickly reflected in stock prices.

Everything else I call 'Research Alpha'.   These are the factors that I focus on in my research.  They include items such as a deep dive into a company's background and structure, spending as much time researching the non-core as the core businesses, looking at both listed and unlisted entities, taking an objective view of owners/management and their background, return of cash and treatment of minority shareholders, scope for adverse transfer pricing, etc.

These are qualitative factors that the sell-side spends almost no time researching.  They are in my opinion are not reflected in the consensus earnings forecasts that 'the Street' likes so much.  Logically, concentrating on these 'Research Alpha' factors should lead to non-consensus investments and performance. Non-consensus research that should produce non-consensus results.

The argument for not concentrating on these types of factors - at least from my sell-side contacts - is that they don't change much and are already factored into share prices.

Easy to argue both ways.

However, my perception is that the sell-side can't do, or won’t publish, this type of research for three reasons. Firstly, most sell-side analysts spend a great deal of time marketing.  They don't have enough time to do this type of research.  Secondly, the sell-side, mostly at its client's request, is increasingly short-term oriented.  Thirdly, analysts are under pressure to stay friendly with management. They run the risk of straining the bank’s, or their own relationship, with the company by publishing anything negative or too revealing.

However concentrating on qualitative factors suits my style of investing - long-term, fact based and evidence driven.  It is also very fun and, so far, rewarding.


I find that after I've done my work I can sleep at night as I feel comfortable with the stewards of my capital and that their interests are aligned with mine.

And what could be more important than a good night's sleep? 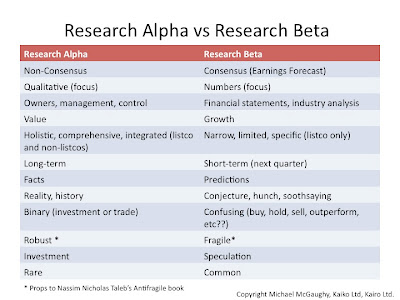