As this is being written Alibaba is in the middle of its roadshow to promote what is shaping up to be one of the world's largest ever IPOs. 2014 is turning into an investment banker's wet dream with IPO activity in the US expected to be the best since 2000 according to a recent report by Renaissance Capital.

This recent history has stuck with me for a while.  As I wrote in a previous blog post my gut feeling is that a large number of IPOs tend to signal an expensive and overbought market.

What is good for corporate capital raising and bankers is unlikely to be good for investors.

In that post I found that my hypothesis is not watertight, at least on a global scale. In several years an increase in IPO proceeds foreshadowed a good market the following year.  It seems that all the positive feedback from the hype surrounding IPOs as well as good post-IPO performance encouraged people to get into the market.

What I did find was the opposite.  A widely-followed global index increased every year after capital raised via IPOs decreased.  In other words, investors were rewarded in the year after proceeds raised through IPOs decreased.

Using similar data - this time from Renaissance Capital - it appears that there is a stronger relationship in the US between IPO capital raised and subsequent market performance. (Renaissance Capital's reports can be found here and here.)

As seen in the chart below, the S&P 500 index mostly moved in an opposite direction to the change in IPO proceeds in the previous year.  This happened in 10 out of the last 12 years as shown by the large number of red arrows. 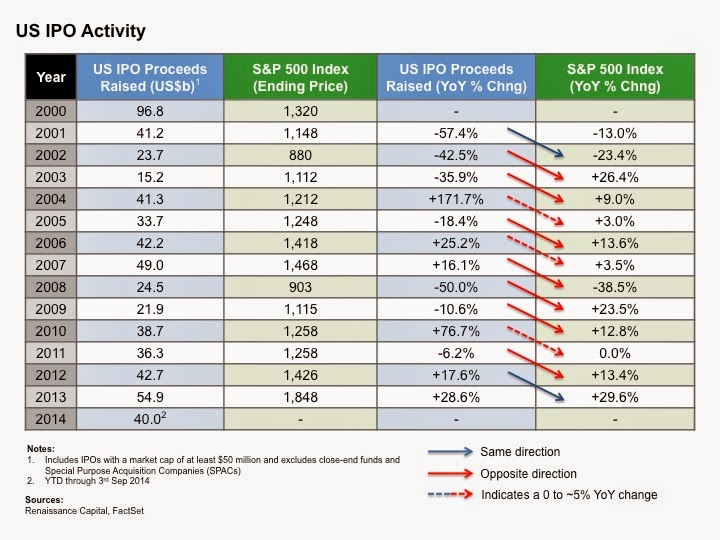 When IPO proceeds increased in one year, the index was largely flat or declined in the following year.  And vice versa.

Readers should bear in mind that these are all rough numbers and based on a small sample.

In the last twelve years Hong Kong's IPO proceeds have given a much different signal. It appears that there is more of a momentum effect of IPO proceeds in Hong Kong.  High IPO proceeds in one year leads to a rising index in the subsequent year.

In 6 out of the last 13 years the direction of the Hang Seng Index's rise or fall was the same the previous year’s change in IPO proceeds.  In other words, positive IPO issuance in one year tends to foreshadow an increase in the index the following year. 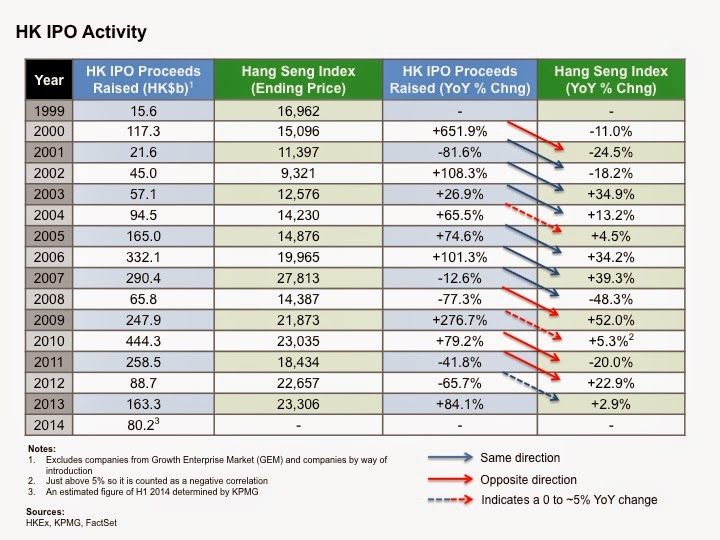 Since 2008 there has mostly been a negative correlation between the two.  (Again I need to emphasize the extremely low number of data points).


Hong Kong More Influenced by the US?

But where it gets even more interesting is comparing the directional change in the main US and Hong Kong indices.  In almost every year since 2001 the direction of the Hang Seng index was the same as the S&P 500.   This is highlighted by the blue arrows between the last two columns in the chart below. 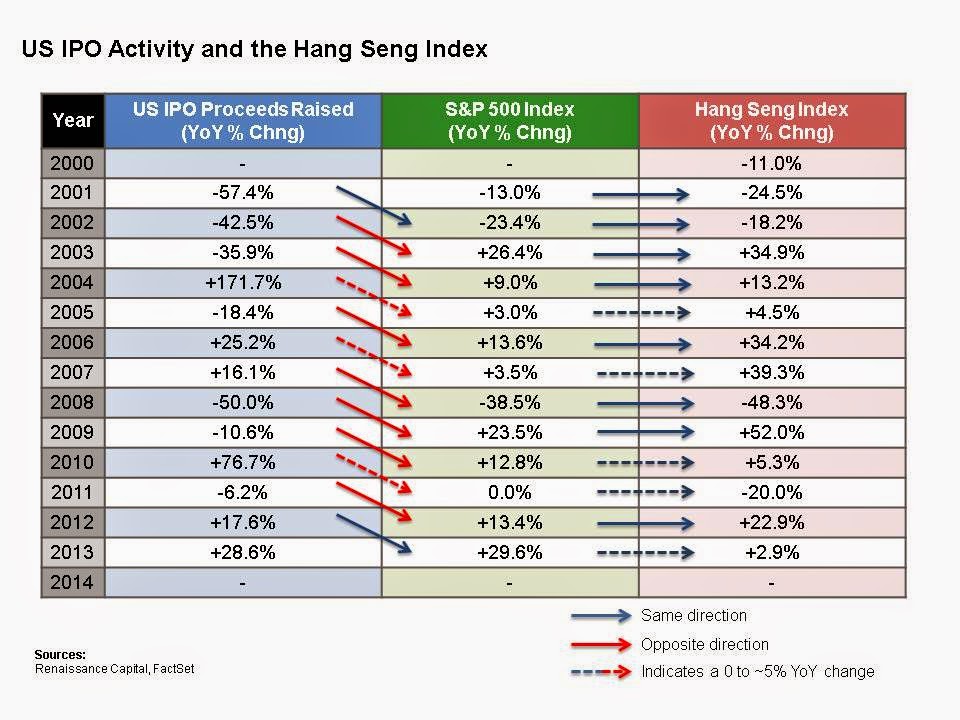 From this quick and dirty analysis it appears that the US IPO market has been a better predictor of subsequent performance of the Hang Seng index than the local IPO market.

This corresponds to my experience. When I was a sell-side equity analyst many of my portfolio manager clients in Hong Kong complained that they spent more time trying to figure out what the US market would do rather than analyze the situation in Hong Kong or China.


I do not know what direction the Hong Kong, US, or any other market will go next year.  It has been shown time-and-again that most predictions are useless.  In my opinion they are typically no better than one's astrology sign or Chinese zodiac.

However with Alibaba's huge IPO, US equity indices reaching new highs and some believing that the US equity market is in bubble territory I'm feeling even more cautious than when I wrote the previous blog post last December (see John Hussman's market comment here).

But investors should bear in mind that I had the same feeling when Facebook went public in May 2012. Like Alibaba it was one of the largest IPOs ever. Upon listing it was the largest company to float with a market capitalisation of some USD100b.  It is now worth over USD200b, and is up slightly more 100% since its IPO price.

Since Facebook's IPO, markets have also done well. The S&P500 and Nasdaq indices are up 41% and 50% respectively. The Hang Seng Index is up 19%.

I was wrong about Facebook signaling a market top and lost out on considerable upside.  There are many reasons that I could be wrong again, but after this analysis I’m even more cautious on not just the US but Hong Kong as well.