European equity markets are in a funk.  The Euro is down some 8% vis-à-vis the USD and RMB over the last several months.  Most markets have given up their gains earlier this year and several are trading far below than where they were at the beginning of the year. The fall is particularly acute in several of Europe’s ‘peripheral’ markets of Greece, Portugal and Austria.  The Athens Composite Index is down 31% in the last six months alone.

Even a European friend has turned bearish saying the cultural differences between the countries are just too difficult to overcome.  He believes that the people and culture of Germany, France and Italy - the three biggest countries in the EU - are just too different for the countries to stay together.  If this is the case, what about the Greeks, Poles and Portuguese?

However other native European friends – and many Asian ones – are looking at Europe and salivating at its cleaner air, cheaper prices and overall better standard of living compared to Hong Kong if not much of Asia.

I don’t know for sure, but I suspect many of these worries are already reflected in equity prices, especially those that suffered the most during and since the 1998 global equity market meltdown.

Except for similar demographics, the comparison to Japan doesn’t make sense.  Japanese equities traded at some of the world’s highest ever valuations in the late 1980s and early 1990s with PEs and CAPEs reaching into the 100s and 90s (see this website).

In contrast ‘peripheral’ European countries such as Greece, Portugal and Austria have amongst the least expensive equity markets in the world based on several longer term valuation metrics.

My opinion is of course colored by being located far away from the storm in Hong Kong. I’m not subject to the nightly news reports on unemployment, stagnation, and government ineptitude that must drag on sentiment.

One of the largest and highest profile foreign investors in Europe is Shanghai’s Fosun group which I wrote about in my 2011 book on Hong Kong and China conglomerates.

For those that don’t know, Fosun is one of the largest privately held conglomerates in Mainland China and likely the most active in raising equity capital.  It has stakes in over 15 listed companies and, through various PE funds, another 16.

They are amongst the better investors having grown from its biotech roots, into a diversified conglomerate mostly through savvy investing.  The group’s co-founder and largest shareholder, Guo Guangchang has been compared to both Warren Buffet and Li Ka-shing, Asia’s richest person.  (Full Disclosure: I hold shares in a couple of the companies they’ve taken stakes in).

Most recently it has been buying assets in Portugal, one of the worst hit countries since 2008’s financial crisis.  So far this year they’ve bought subsidiaries of state-owned insurance company Caixa Seguros E Saude and one of its largest health care providers, Espirito Santo Saude.  They are also reported to be looking at Novo Banco, which was formed from the remains of this year’s big corporate blow-up of Portugal’s than largest lender, Banco Espirito Santo.

There are a lot of risks in Europe.  The Euro could continue to slide, the needed policy changes may never materialize, the Euro and European Union could break up.  These are much of the same fears that gripped financial markets some two years ago and sent equity markets there plunging.

And they could continue to plunge.  My base case for crisis investing is Indonesia which suffered the most during the Asian financial crisis.  Between 1998 and 2003 the Indonesian index rose and fell by over 30% no less than five times.  After an initial 108% rally from its March 1998 bottom, it fell 42% between July 1999 and March 2001.  If Europe is similar, the fall in equities prices may have further to go and Greece’s 30% dip over the last eight months could extend further despite its attractive valuations.

However buying an asset at a low price tends to minimize risk of further downside. Prices are low now, but this does not mean they can’t get lower going forward.  But than prices could just as easily rise. Investors who missed 2012's low now have a second chance to get in at decent prices.

Many, if not most or all, of the risk  are already reflected in the prices, and investors could do worse than taking advantage of the negative sentiment and news flow to pick up some quality assets at decent prices.  Longer term investors like Fosun are making significant investments and this may be a chance for the rest of us to get some others while they’re on sale.

In my research and investing I stress three things: people, structure and value.  I look for companies that are controlled and managed by quality people, have corporate structures that align minority and majority shareholder interests and trade at valuations that are below intrinsic levels if not outright cheap.

Academia is one of my favorite sources for information on corporate leaders and business structures.  There are a handful of academics in various business sub-disciplines that look at corporate structure, and objectively research leaders' backgrounds and relationships.  While most write for entrepreneurs and a public policy audience, many times their studies contain helpful information for investors.

Professor Joseph Fan who works at the Chinese University of Hong Kong is one such expert.  Individually and with others he has authored and published many studies and articles on what works and does not for family owned businesses in Hong Kong, Taiwan, Mainland China and other Asian countries. (Prof. Fan's research and personal homepage is here).

This book – like many of his other studies – is geared more toward helping entrepreneurs and wealthy families structure with their succession plans.  Intergenerational gaps many times lead to failing businesses, broken extended families and sometimes both.

While investors are not the target audience Critical Generations does contain some interesting observations: 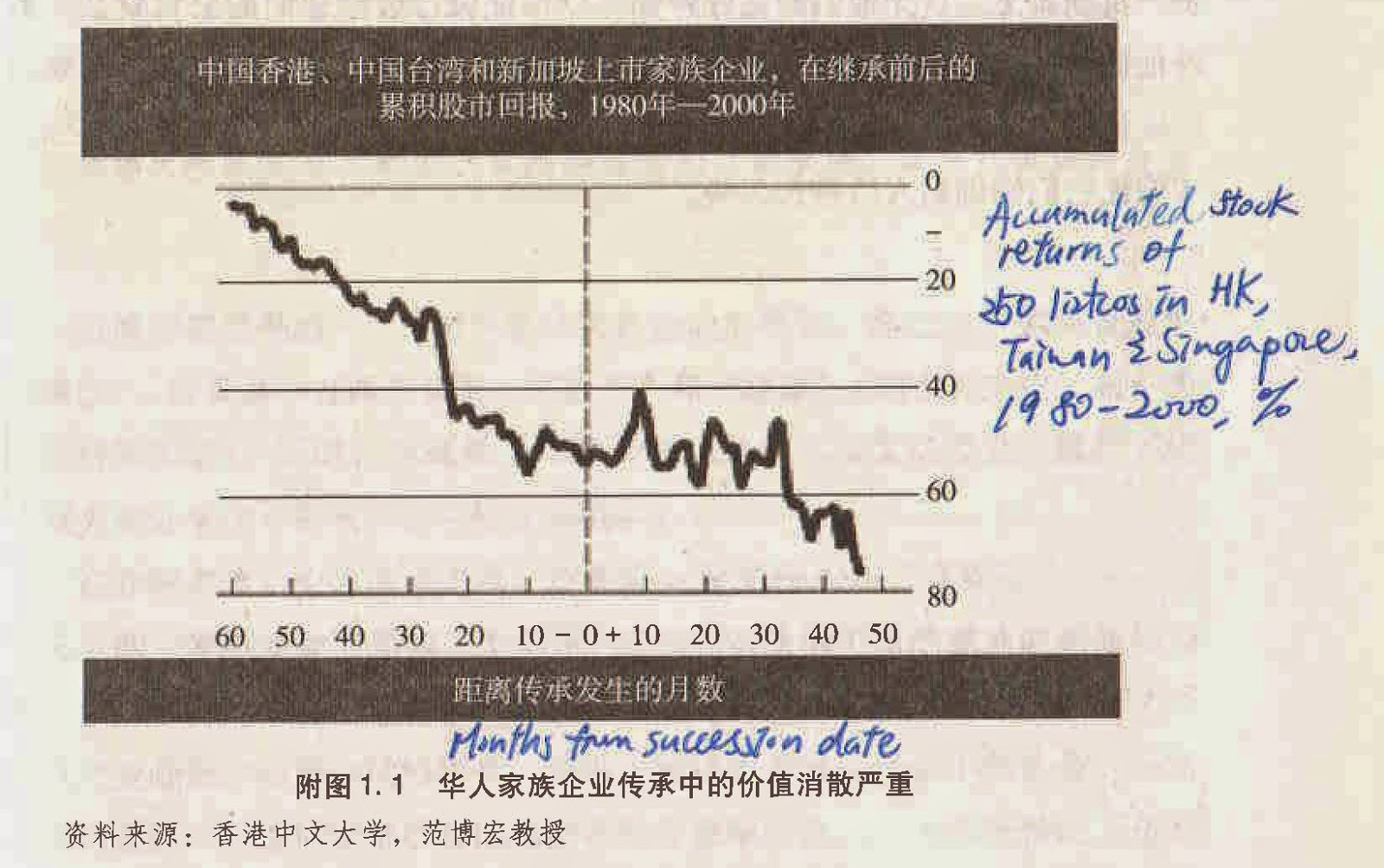 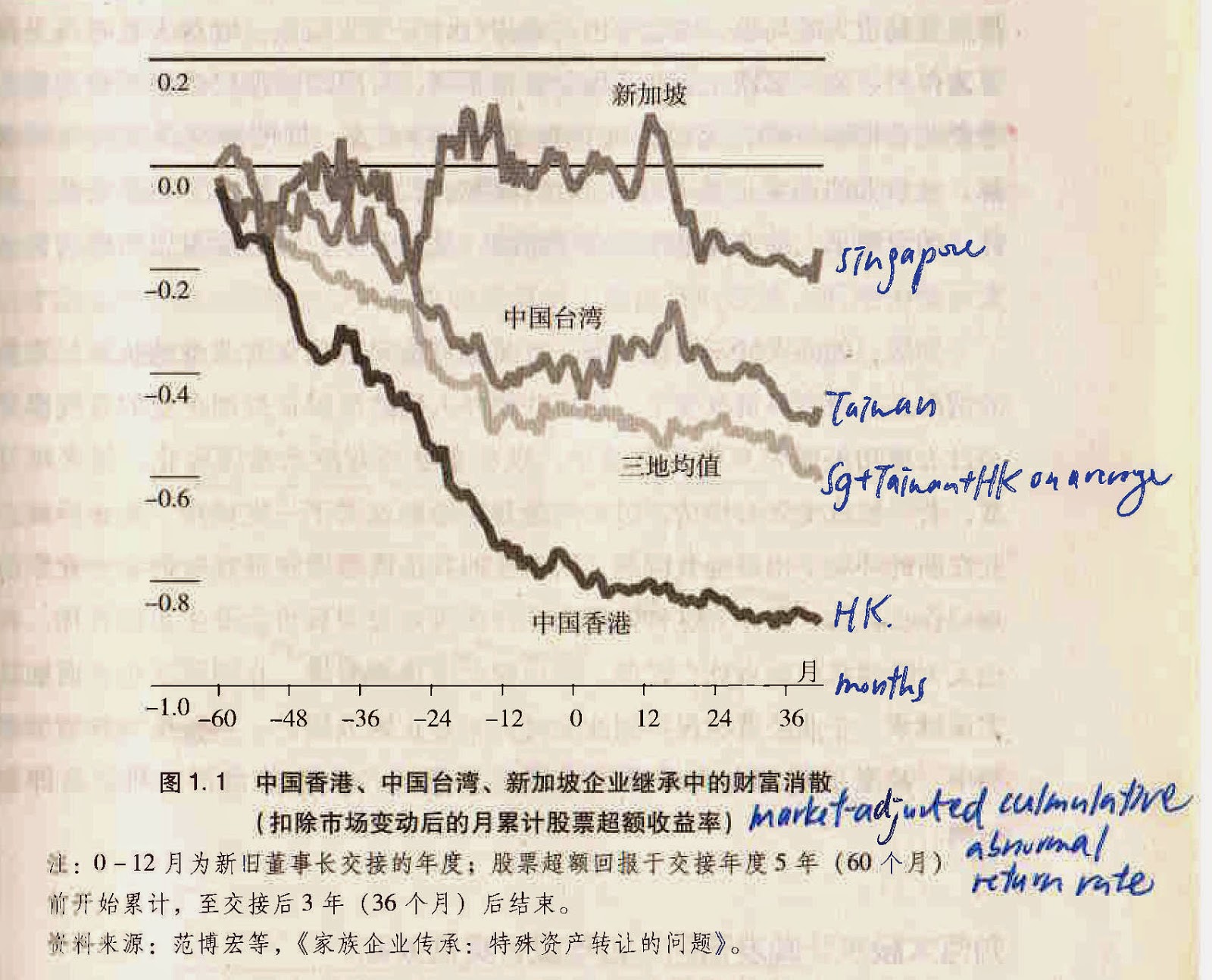 The above bullet points account for a small part of the book.  The bulk of it provides research, insights and tools families can use to improve their structure and, with luck and foresight, the firm’s transition to the next generation.

Note that the book was originally written in Chinese, although several of Prof. Fan’s studies have been published in English.  My very capable assistant JC Ho read and summarized the Chinese version from which this blog post is based.

Prof. Fan’s new book The Family Business Map: Assets and Roadblocks in Long Term Planning is in English and is due to be published toward the end of October 2014 (link here).