In my research and investing I stress three things: people, structure, and value.  I look for companies that are controlled and managed by quality people, have corporate structures that align minority and majority shareholder interests and trade at valuations that are below fair value if not outright cheap. This post is about people - successful Egyptians who happen to be Christian. 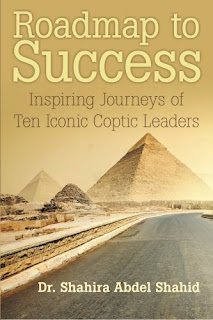 I never gave the Coptic Christians much thought. To be honest the only reason I became interested in the book is because there is so little information on modern Egypt. There are tons of books on ancient Egypt, the pharaohs and mummification, but virtually zilch on the second largest country in Africa, one of the largest in the Mediterranean, and the largest in the Middle East. With over 95 million Egyptians, an active press and smart switched-on people, there’s a lot going on there that doesn’t make it into English.

As an added bonus, the author is a long-time adviser to the Egyptian Stock Exchange which likely gives her access and respectability to interview business leaders. Six of the ten interviews are with people in the private sector.

Investors in Egypt will recognize several interviewees, with two being C-level leaders at listed companies - Reem Asaad at Raya Holdings and Maged Shawky at Beltone Holdings.

My key negative comment is that there's no index. There's a lot of valuable information and insight here, but it's hard to find after the first read.

Like other book reviews for this blog, I’ve tried to summarize some of the key points below through quotes taken from the book. However, I had a tough time whittling down the good stuff as I could have copied and pasted much more, and I strongly encourage people to buy and read the book. My thanks to Dr. Shahid for writing it.

Egypt at the middle. “The Egyptian style is so interesting and unique because it has been influenced by many cultures…. the ancient culture of the pharaohs, the Coptic culture, the Muslim culture. Because of this combination of cultures, Egypt is incredibly rich and thus has become a huge source of inspiration for every artist, painter, or stylist."  Ms. Marie Bishara, fashion designer and vice chairman of Bishara Textile and Garment Manufacturing Company (BTM) Cairo, Egypt

Proud to be Egyptian “…being an Egyptian, a descendant of one of the oldest civilizations in the world, that of the pharaohs, taught me how to be brave and handle difficulties." Professor Rashad Barsoum, emeritus professor of internal medicine, Kasr Al-Ainy Medical School, Cairo University; and founder and chairman of Cairo Kidney Centre

“I believe every Egyptian should be very proud of being Egyptian, because of our unparalleled history characterized by artistic, architectural, scientific, and spiritual greatness.” “Being descedents of the pharaohs is an unmatched privilege”  Dr. Mona Zaki, founder and CEO of Global Strategic Consultants, Cairo, Egypt, and Art and Business International Company, Budapest, Hungary

“Similarly, all conquerors of Egypt – Persians, Assyrians, Romans, and others – could never change the origin or race of Egyptians and Egyptians did not change to become Romans or Persians.” Dr. Gawdat Gabra, visiting professor of Coptic Studies at Claremont Graduate University, California, United States; and co-editor in chief of Claremont Coptic Encyclopedia

Nasserism still looms large.  “Unfortunately, since the 1960’s the Egyptian government has acted as a provider for individuals, attending to their basic needs such as food, shelter, and jobs in the public sector.  As a result a lot of Egyptians still expect everything from the government…” Prof. Rashad Barsoum

“In Egypt, unfortunately, the environment has been very hostile and suspicious with regard to the private sector since the 1960s.  It generally views the private sector as always profiting at the expense of customers or engaged in fraud, unless proven otherwise.  I think this has been the sentiment since the nationalization took place in the 1960s.” Mr. Karim Saad, Chairman of Samcrete, Engineers and Contractors and Managing Director of Sami Saad Holding (SONID) Cairo, Egypt

Education and women empowerment are two key items interviewees think Egypt should improve upon. “I believe Egypt can be a developed nation within ten years. Of course, the first and most important strategy is to completely overhaul the education system.” Reem Assad, CEO of Raya Data Center; member of executive management, chair of corporate social responsibility committee, and board secretary of Raya Holding Group, Cairo, Egypt

Arabic but not Arab? “Arabic is the mother tongue of the Copts and it should continue to be so. I do not recommend that Copts learn Coptic as a language to be spoken or read in their everyday lives” “Co-operating with our neighbouring Arab countries in various ways is excellent, but this does not mean that we Egyptians have to lose our original identity.” Dr. Gawdat Gabra

But Arabic's not very useful to study Egypt's history. “To be successful in the career of Egyptology as well as Coptology worldwide, you must learn three languages – English, French, and German – because research and publications in these two disciplines are in these three languages.” Dr. Gawdat Gabra

The military may be more popular than I thought. "It is important to have in place a strong and well-equipped military force similar to those in other leading countries. Egypt has survived vicious terrorism acts and the turbulent revolution years because of its strong military.” Ms. Marie Bishara

Even the Copts can be biased. “The third challenge was the fact that I was a Protestant, and thus it was not easy to be accepted and win the trust of the Coptic Orthodox Church.” Dr. Gawdat Gabra

Religious tolerance is greater than headlines suggest. "Being Christian in Egypt was not a subject of concern at all. I grew up in a period of religious tolerance and the majority of my friends were Muslims.” Ms. Reem Asaad, Raya Holdings Group

“I never faced any bias during my judo career in Egypt. The judo federation includes thousands of members, but there were only six Christians…”.  “When I played at the national level, I was the only Christian athlete on the judo team. All my coaches were Muslims. I felt literally zero discrimination.” Ms. Mira Nassif, Owner of Miracle Design, Cairo, Egypt and former African judo champion

“Personally, I was never negatively affected in my career or life by being a Christian in Egypt.  However, we cannot be blind to the fact that there exists discrimination and inequity against Copts in Egypt.” Professor Rashad Barsoum

“I know well that there are cases of religious bias in Egypt in government posts and other organisations. I did not face this issue at all during my entire career with any of my former bosses, capital market regulators, or ministers” “Their religious beliefs had no influence on their decisions or choices.” Mr. Maged Shawky, vice chairman and managing director of Beltone Financial Holdings, Cairo, Egypt, and the youngest chairman of the Egyptian Stock Exchange (EGX)

The Coptic church has a long history. “The Coptic Church is undoubtedly the oldest institution in Egypt; it has existed continuously from the first century to the present day. Accordingly, the Coptic Church is a landmark in Egypt’s history and heritage.” Dr. Gawdat Gabra

Martyrdom is a big part of their history. “Martyrdom is the number-one factor for the continuity of the Coptic Church in Egypt.”  “The most severe wave of persecution in the Egyptian church started during the reign of the Roman emperor Diocletian (reigned 284-305) and continued under Maximminus Daia (reigned 305-313).  Since the Great Persecution was particularly severe and hundreds of thousands of Christians were put to their death, the Copts used the Era of the Martyrs as the point of reference for their calendar…”. “Later, a wave of Byzantine persecution began in AD 451….”, “Copts cherish all the saints, but martyrs come first…” Dr. Gawdat Gabra

“To be honest, I envy Copts who were unjustly treated because they will be rewarded in heaven and be glorified.” Professor Rashad Barsoum

“The Coptic Church is known as the church of the martyrs, maintaining its strong faith throughout the years since the Roman persecution until today…” Dr. Mona Zaki
Posted by Michael McGaughy / 麥德安 at 2:15 AM 4 comments: