Decrease in IPOs is a Good Signal

Closing out the year, IPOs are back in the news.  There were several large IPOs in HK and the US in the last quarter of 2013 and many had good first day price increases.  Some press articles are expecting IPO activity to increase in 2014 with many calling for it to be the best year for IPOs since 2007 (articles here and here).

A large number of IPOs always seemed like the sign of a market top to me.  But this has been more of an assumption than something based on fact or past performance.

Thanks to accounting firm Ernst and Young and index provider MSCI I was able to assemble the chart below.  It shows IPO capital raised and overall global equity performance as tracked by the MSCI All Country World Index (ACWI) for the past 11+ years.  Not a large sample at all, but better than nothing.

Bear in mind that these are quick and dirty numbers and not a strict apples-to-apples comparison.  Ernst and Young's IPO figures include several markets that are not included in the AWCI index such as Argentina, Columbia, Syria and Ukraine.

However all of the large markets are included in both - the US, UK, Japan, China, etc. The US accounts for close to 50% of the MSCI ACWI and it has been the largest issuer of IPO equities in two of the last three years. “It is better to be roughly right than precisely wrong”, John Maynard Keynes is believed to have said.

The quick and dirty comparison shows that in the past eleven years, the global index increased every year after IPO raised capital decreased.  In other words, a good time to invest would have been the year after the amount of money that went into IPOs decreased.  This is highlighted by the red arrows in the chart below.

However the reverse does not seem to hold.  In the six years that more money went into IPOs, the global index increased in four of those years and decreased in two.

Thus my initial assumption was wrong.  A large increase in money raised by IPOs does not necessarily mean a market top.  If anything, I suspect that the amount of media attention surrounding new companies coming to the market likely generates more interest in the stock market which helps keep or push up prices and valuations.

One additional observation.   For the last 12 years, there has mostly been a direct correlation between the direction of IPO capital raised and the direction of the index.  The only years the two were not in sync - at least during this time period - was 2003 and 2012.  In both years IPO funding decreased while the global market index increased. 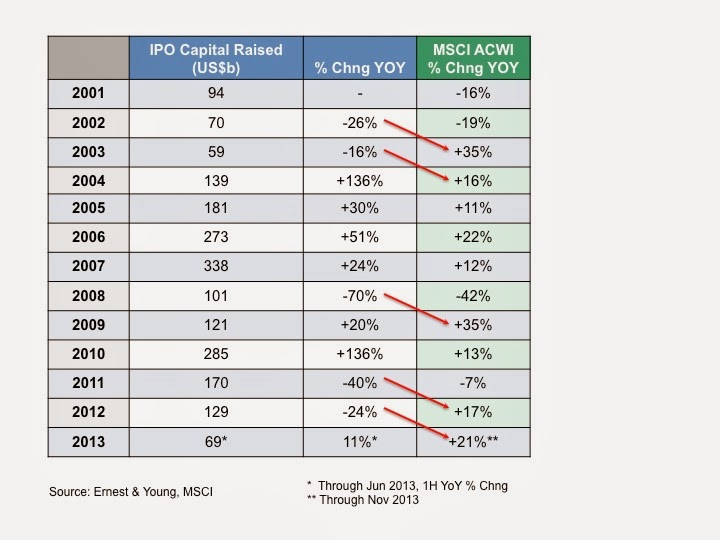 The Money Game is the second book by the late Adam Smith (aka George Goodman) I’ve read and reviewed.  Like Supermoney I was struck by how similar the investment world is today compared to 45 years ago, when it was published.

The Money Game contains numerous quotes from John Maynard Keynes' work and it’s clear that the author is a fan.  Many times the author uses the Keynes' writings to reflect on the state of the investment world in the 1960s.

Which - come to think of it - is basically what I’m doing in the remainder of this blog post.  “History doesn’t repeat itself, but it does rhyme”, Mark Twain is supposed to have written.

“’Sir!’ said Sheldon the Kid.  ‘The Western United States is sitting on a pool of oil five times as big as all the known reserves in the world – (it is) shale oil.  Technology is coming along fast.  When it comes, Equity Oil can earn seven hundred and fifty dollars a share.  It’s selling at twenty-four dollars.  The first commercial underground nuclear test is coming up.  The possibilities are so big no one can comprehend them.’”

‘The shale oil play,’ I said, dreaming.  ‘My old MG TC. A blond girl, tan from the summer sun, in the Hamptons, beer on the beach, ‘Unchained Melody,’ the little bar in the Village…’.

Comment: The dialogue above describes a young analyst recommending a shale oil company to older Wall-Streeters who remember looking at shale oil as an investment when they were new to the investment industry.  This means that the current boom is the third time shale oil has attracted investors the last 70/80 years. FYI Jim Rogers has been pessimistic on shale as an investment (article here).

Behavioral Finance Is Not New

“Outside of New York there is an aggressive fund housed in pastoral surroundings, run by a man who won’t go into New York.  It is not only that he considers New York a sink, which he does, but that, ‘all those fellas ride into New York on the same train and read the same things and talk to each all the way in.’, This captain of money management doesn’t talk to anybody and doesn’t read anything. ‘All that is all in the price,” he says.  ‘Eighty percent of the market is psychology.  Investors whose actions are dominated by their emotions are most likely to get into trouble.’

The book references several psychology books including Dr. Gustav Le Bon’s “The Crowd: A Study of the Popular Mind”, Sigmund Freud’s “Group Psychology and the Analysis of the Ego”, Dr. W. McDougall’s “The Group Mind”.

Comment: What I thought was new – Behavioral Finance - is just more and better understanding of something that others had figured out before.  (But I still love Kahneman and Taleb.
Great video of them together is here.)

“Then the salesmen of mutual funds noticed that when they spread the literature from all the funds before prospective customers, a lot of the customers weren’t’ interested in nice, balanced, diversified funds any more.  They wanted the funds that had gone up the most, on the idea that those were the funds that would keep going up the most.”

Comment: Momentum investing is still popular.  In the last few weeks I’ve read and heard many suggesting that the US and Japanese equity markets will continue to be strong in 2014. They were amongst the best performing in 2013 so are easy for financial advisors to recommend – the trend is your friend.  (I personally think the US is showing many signs of being overvalued.  Buffett has commented that he can’t find much to invest in and Klarman has supposedly returned cash to shareholders.  “Tonight I’m goin’ party like it’s 1999”, sang Prince).

“All the players in the Game (i.e. investing) are getting rapidly more professional; the amount of sheer information poured out on what is going on has become almost too much to absorb”.

Comment: Even before the Internet, cable TV, personal computer, fax, and chumps-like-me-who-write blogs, there seemed to be too much information on the markets.

“Who really makes the big money? The inside stockholders of a company do, when the market capitalizes the earnings of that company”

Comment: Ultimately those who have control make the most money.  Not the outside and minority investors. The people that really win in an IPO are those that are selling equity.  Corporate executives manage and influence earnings to increase the value of their stock options.

Markets Reflect What is Happening in Society

“Markets are only a tiny facet of society, but being made by mass psychology, they are a good litmus paper for what is going on.”

Comments: The market tends to foreshadow economic trends.  Not the other way around. Investors spend too much time on macroeconomics.

Quoting ‘a professor at a one of the US’s leading university’, “…there are a couple of sophisticated funds that have computers like ours on the air.  Then it really gets fun.  Our computer scans the pattern of their other computer on the air, what its buying and selling programs seem to be.  Once we get its pattern, we can have all kinds of fun.  We can chase the stock away from it.  Or even better, we can determine where the other computer wants to buy.”

Comment: This sounds like it could be an article or marketing material for a CTA fund or high-frequency trader.

Socialism for the Rich

“One of our learned economists has described our economic system as “state socialism for the rich.  If socialism is the public ownership of the major institutions and industries of the nation, maybe we are just taking a unique way of getting there.”

Comment: Quantitative easing and its positive effect on bankers’ bonuses is now criticized as socialism for the rich.

“In the long run, the actions of all investors, individual and institutional, professional and nonprofessional, have to be based on the belief that leadership knows what it is doing and that rational men are handling the nation’s business rationally.  If that belief fades, then so do the markets.  They do not merely dive, they dive and then they disappear.  It happened here in the blight of the spirit from 1930 to 1933, and it has happened in other countries. “

Comment: Politics and leadership can be very influential in both the long and short term.  See previous post on the recent influence of election cycles on Asian markets here.

Governments Print Their Way Out of a Bind

“…the problem is universal.  It is that governments are now held responsible for the welfare of the people.  The aspirations for the people can outrun their ability to pay for them, and nobody has yet found a way to create answers to the aspirations out of thin air. What this means is that if governments have a choice between attempting full employment and defending their currencies, they will nearly always pick jobs over the worth of the currency.  Currencies do not vote.  In this country, the Full Employment Act of 1946 spells this out.  The government is committed to full employment, and if it must pump money into the economy to achieve this, and if there isn’t enough money, it creates the money.  Long-range inflation is the policy, articulate or not, of every country in the world. “

“Never in 5,000 years has there been a government that could resist debasing its currency. “

Comment: Except for the reference to the Full Employment Act, the above sounds very similar to what I’ve been reading for the last several years.

“’Skeptics, yes,’ said my friend the Gnome of Zurich.  ‘We stand for disbelief.  We are basically cynical about the ability of men to manage their affairs rationally for very long.  Particularly politicians.  Politicians promise things to the people for which they cannot pay.  So we Gnomes stand for Reality, or discipline, if you will.  Without us, the printing press of every government would simply print currency, there would be wild inflation, and in no time the world would be back to barter.’”

Comment: Sounds like something out of a hedge fund monthly letter.  Saving the world’s financial system, while betting on its demise, at 2/20.
Posted by Michael McGaughy / 麥德安 at 11:27 PM 2 comments: