Asia is more politically stable than ever before. A key reason for this is that virtually all Asian countries have functioning and predictable leadership transitions. Most with stock markets have an increasingly entrenched and open democracy.

In the long run this creates stability.  Democracy can seem like a messy and chaotic process, but as long as the process is adhered to and respected it seems to create long-term stability.  And equity markets like this consistency.

Leadership changes create uncertainty, something markets don't like. They typically trade at lower valuations when investors’ and speculators’ collective unconscious deems that uncertainty has increased.

There have been several studies looking into the link between political change and stock market performance in the West.  If I remember correctly they seem to show that valuations are highest during the third year of a four-year US presidential cycle.

In the third year, the uncertainties associated with a new administration are no longer uncertain. Management has made their capital allocation decisions based on the new government’s policy initiatives. Investors have incorporated this new information into their strategy. Analysts increase target stock prices as forecasts are extended based on the new perceived stability.

I've also read that a potentially good time to invest is when a candidate from the US Democratic Party is polling high before the election.  The market likely trades down as the Fox News labeled far-left, tree-hugging hippie is perceived as being anti-business and the American Way.  After investors and speculators realize the new guy is not so bad – and is going to keep his banking and business buddies happy - the market eventually rebounds.

Closer to home, I don’t think many investors are factoring political transitions into their investment process. Or at least I've not seen much written about it.

In my opinion Asia’s political transitions should actually have more influence on large cap equity prices and the headline indexes than in the West.

The reason for this is that Asian governments control a significant number of the region’s large listed companies.  According to calculations done a few years ago, Malaysia and China have the highest percent of central government controlled companies at about 50% of market cap.  It was about 40% in Thailand, 35% in Singapore, and 30% in Indonesia.

An example of how this works occurred when I was researching a report on China's corporations.  While researching and writing the book, news started to filter out that Xi Jinping and Li Keqiang would be the next leaders in China.  Not long after there was a leadership change at the SOE oil companies and later the state-owned banks. A few analysts wrote that capex plans had been put on hold while waiting for leadership and policy changes.

There have been several articles written about what caused the recent sell-off in emerging markets. I wonder how much of this may be due to the uncertainty surrounding upcoming elections.

Eyeballing the table below - which lists countries by the date of the next general election - one gets the sense that the markets that are recently the most volatile, are also the ones where there is an expected leadership change in the next few years.

Amongst the two hardest hit were Indonesia and India. It could just be a coincidence that both are expected to hold elections next year, but I sense some causation. We don’t know who will be governing Indonesia twelve months from now, and India has to hold a general election by May next year.

Peak-to-trough Indonesia fell by 27% in the 2nd and 3rd quarter this year.  Its currency is down some 15% since the beginning of April.  Between the two, USD investors were down some 40% by mid-August.

The Indian market did not fall much compared to others – down some 14% peak to trough - but its currency is now down some 22% since the beginning of April.  For USD investors this was a 36% decrease in a relatively short time. 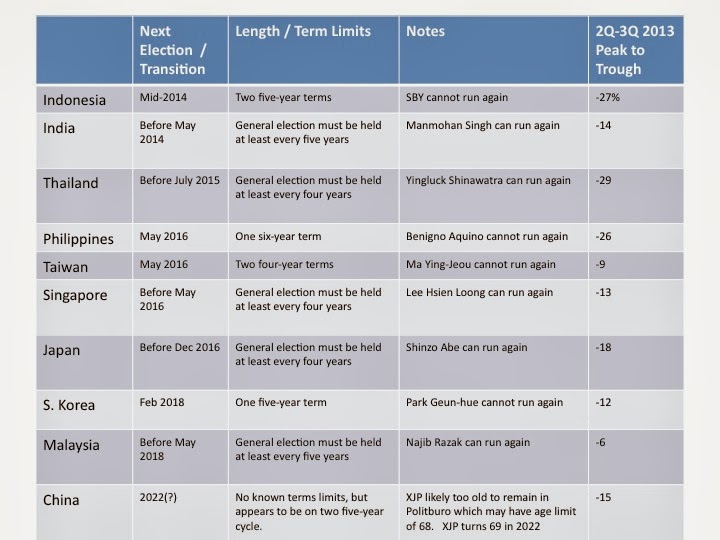 Most of the Asian markets that fell the most were also the most expensive.  According to several long-term valuation metrics I track, Indonesia, the Philippines and Thailand were some of the world’s most expensive markets going into the 2nd quarter. They were also at a phase in the election cycle that made them politically more stable than they had been for several years.  Red and yellow shirts have been peaceful in Bangkok; Aquino is proving to be the best leader of the Philippines since Ramos; and for the last 9 years SBY has provided the first real political stability in Indonesia since Suharto’s 1998 resignation.  I suspect his stability helped the markets to increase to the rich valuations they still trade at.

The change in Asia’s political landscape has been very impressive since I first came to Hong Kong as an exchange student in the mid-80s.  Taiwan was still under martial law. PRC politics were shrouded in mystery. Marcos was still in power.  Suharto, Mahathir and Lee were SE Asia’s strongmen. We came to accept that military coups were the normal way leaders were replaced in Thailand.

More impressively the transition to a more open political change came about relatively peacefully.  Compare what is happening in the Middle East to Asia ex-Japan over the last three decades.

The changes have made each country – and Asia as a whole - more stable.  Increased FDI flows to the regions are a reflection of this.

I don't see any reason that Asian markets won't react similarly to the market psychology that seems to accompany the US election process.  "People Are People" sang Depeche Mode in their 1984 hit.