In Tokyo and Fujisawa last week, I had two days of meetings followed by three days of eating and drinking too much.  As some of you know, I like good sake and I was not disappointed as I discovered some gems.  But that is the subject of a meal, not an email.

December in Tokyo is a chance to catch-up with old friends, enjoy the Christmas lights, and eat and drink.  Christmas is more of a couples event with the key family holiday celebrated on 1 January (which is more like their Christmas or Chinese New Year).

I returned to HK positive about the country and its investment merit.  A lot of this has to do with valuations.  Large cap index Japan remains the least expensive market on a P/B basis amongst developed markets as well as compared to all Asian markets (but not on a PE or yield basis).

Many companies have no coverage at all as Japanese and foreigners seem to have virtually given up.  There are many companies trading below replacement cost, Graham net-nets are numerous (over 400 according to one manager I met), etc.  In short, it is good hunting ground value investors.

I met with a handful of managers and others in the financial community.  And sure enough, the value guys have done well.  And this may continue as stocks are still cheap.

My expectations were not high. I had been told by Japanese friends living in HK that they would never move back to Japan due to fears of radiation and/or not trusting the Japanese government.  They also noted that many rich Japanese have left Japan for good.   My mid-day, mid-week HK/Narita and return flights were likely about 50% full.  Not sure if this was due to it being the slow season or people staying away from Japan due to radiation fears.  I suspect it is a little of both.

The picture I got from in Tokyo was very different.  I had not been there for over 1.5 years so my last trip was before the earthquake, tsunami, and nuclear plant trifecta.  In its wake most my contacts in the financial industry sent their families to southern Japan while they worked in Tokyo. While many say there are not as many gaijin in Tokyo as before, all my Japanese contacts are by-and-large back to their regular working and home routine.

My contacts did not think it was a watershed event that will change Japan as some English press and commentators had described. I was told that people are more apt to live for today rather than save for the future. But savings rates have been coming down in Japan for a while. People are concerned and still think twice about eating or drinking certain things. Almost everybody in Tokyo is drinking bottled water, and a popular children's milk powder supplement recalled its products after higher than normal radiation was detected (albeit within acceptable limits).

My Tokyo financial community contacts are also relaxed about the recent Olympus scandal.  Like Buffet, several compared it to Enron and believe it is an isolated incident rather than an example of the ever presence influence of Yakuza in corporate Japan, or of many companies rife with poor corporate governance and controls.

Buffet's Japan trip - which I thought should be a catalyst - was also brushed off as a non-event.  But than he's invested in many US companies in the last nine months and publicly said this is a good time to invest, yet cash levels remain high and equity holdings low.

While everybody I met said that equities are cheap, nobody could think of a catalyst.  But this tends to be a Catch-22 situation as once a clear catalyst emerges, prices have likely already reacted or will soon.

One potential catalyst (in my opinion) could be good past performance that may spur others to jump on board.  Most people and managers are momentum players after all.

One of my favorite L/S funds is up over 25% in the last two years in Yen terms. Add in about 15% increase in the Yen and we get about 40% returns to USD investors. One manager's small cap fund was up even more. A very active L/S fund is up 55% since July 2010, and over 25% YTD (in USD terms).   Fund NAVs of my small sample set are substantially above their pre-Lehman high.

Despite the good performance, valuations are not demanding. The funds’ underlying investments average 8-9x PE, 0.9-1.3x PB, and 2-3.5% yield.  The active L/S fund has a net exposure of over 110% - one of its highest ever - and no short positions as manager thinks valuations are too low to short.

And I agree with him.  Japan remains Asia’s (and possibly the world’s) cheapest market on a PB basis, dividend yield is twice JGBs’, and it is not hard to find stocks trading at 4-5% yield, below 1X PB, and less than 6x PE.

This all reminds me of the famous Graham quote about the market being a weighing and voting machine depending on the time horizon.  It also reminds me of an Economist article from 2007 and manager visits since then which all noted the significant changes that are taking place in Japan.  The article noted that the changes are very real, but said they will play out in "typical" Japanese fashion – slowly and quietly.  Thus they will not be wrapped in a PR campaign as corporate restructuring are in the US or Europe, but instead happen over a longer period of time with little fanfare. If true this makes for a good case for employing a knowledgeable manager.

- Increase in entrepreneurialism.  Had coffee with a friend's contact that has retired from JAL and is advising a start-up mid-range LCC (budget airline).  Others I met socially had started their own companies: real estate entrepreneurs, bento box assembly and delivery, insurance product distribution, and others who are thinking of branching out on their own.

- Necessity is the mother of invention. Another person I met has a part-time job in addition to his full-time job. This used to be verboten in Japan, however I was told this is nothing special and many companies are encouraging their employees to take additional jobs and work.  His firm cut its employees' pay and asked them to take outside jobs, allowing them to leave at 4 or 5pm to do so.

- Women working.  I had a fun sushi night with several 30-something successful women working in a variety of fields - online marketing, logistics, executive assistant, etc.  Other workingwomen contacts include a deal negotiator for a large Japanese chemical company and a woman who recently sold her venture-backed headhunting company.

- Home is not sacrosanct - I was told that several months ago, Nomura laid-off Japan-based employees for the first time ever.  In the past it had only let go non-Japan based staff. Foreign financial firms continue to downsize.

- Increase in risk?  On the marketing front, I had a better reception than before.  Distribution channels besides the large trust and investment banks are opening-up.  There are signs that pension funds are starting to (finally) hire full-time finance professionals instead of long-serving, loyal former employees.

- Value – Even with the Yen increasing since I was last there, I did not feel things were too expensive.  I’m coming from HK – which is not cheap - but it seems that property prices and prices of clothes and toiletries were not too expensive – especially outside Tokyo. And given the Japanese emphasis on quality they seem to represent good value.

In short, I returned more positive on Japan than when I left.  It has the right characteristics for active managers to continue to do well – lot’s of cheap stocks, world-class efficient recession-tested companies, educated workforce, rising per-capita income, increasingly open to change, few people in the playground, etc. Not sure what the indexes will do, but with over 2,000 listed companies I suspect there’s a lot underpriced gems there.

The first attached picture is likely the world’s most advanced vending machine.  It was taken on one of Tokyo’s train platforms, and is a 30- or 40-inch flat touch screen that switches between showing commercials and a simulated physical vending machine face.  The second is from a Fujisawa personal care store that shows bags of refills next to their standard packaging. 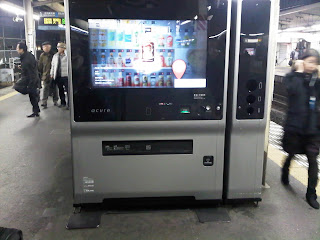 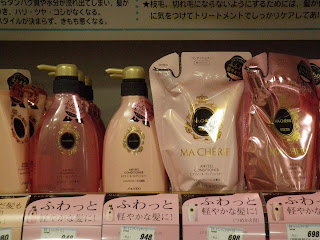