One Of Global Capital Market's Most Powerful People Lost His Position

China’s central government news agency, Xinhua, yesterday announced that the head of SASAC, Jiang Jiemin, is under investigation for ‘serious discipline violations’.  Typically just being under investigation is enough for a high-ranking official to lose his/her position.  This seems to be the case, as references to Jiang on  SASAC's website have been removed.

For those that don’t know, SASAC stands for the State-Owned Assets and Administration Commission of the State Council.  It supervises and manages non-finance state-owned assets owned by China’s central government.

On paper, the head of SASAC is one of the most powerful people in global capital markets.  Companies under SASAC and its finance company equivalent, Huijin, control more listed equity by value than any other organization in the world. By my calculations these and other SOEs directly under the Ministry of Finance, typically account for 4-5% of global equity.

Here is the breakdown.  The three stock markets in China (HK, Shanghai, Shenzhen), account for some 9-10% of global market capitalization.  About half of these consists of Chinese Central Government controlled companies.  This means at any given time about 4-5% of global market cap is owned and controlled by the Chinese Central Government. The bulk of this come under SASAC (see table below).

SASAC’s function is repeated at the provincial and local level, which increases its influence on global capital markets a bit more.

Take it all with a grain of salt.  SASAC does not appear to be as powerful as one would expect given its responsibility and the fact that some of the world’s most valuable companies are – on paper – under its domain.

The reason for this has to do with the government’s structure and hierarchy.

Secondly Jiang Jiemin has only been at SASAC for 6 months having been shifted there from the head of CNPC/PetroChina this March.  I’ve not heard or read of any changes he has suggested or instituted in his short time leading the organization.

The big question going forward is the structure of the government’s ownership and control of its SOEs.   China’s SOEs are criticized for getting the majority of bank loans and crowding out privately-owned SMEs.  The bosses of the largest SOEs are seen to be more powerful than many politicians.  In every SOE I researched for my book on China's corporations, all were involved in scandals.  Many times these scandals went on for several years before the accused was finally investigated.

My general feeling is that there will be little reform of the SOEs in China in the near term.  There are likely high-powered vested interests and ghosts in the cupboards that will resist any change.  I suspect it will be a longer, drawn out-process more similar to Taiwan's privatisation.  There are many similarities between Taiwan some 20-25 years ago and China now; and I think Taiwan's development and reform may be a good road map for things to come.

Politics however is impossible to predict, and the news that Jiang Jiemin and other senior officials at CNPC/Petrochina are under investigation is surprising.

Hope springs eternal however.  Xi Jinping took over the central military command much sooner than his predecessors.  Recent investigations into high ranking party, government and SOE leaders could signal that he has more power and leverage than many pundits originally thought.   I am halfway through his biography which indicates that despite spending most of his career outside of Beijing, he is very well connected with senior military, business and political leaders.

The Third Party Plenum is due to take place in November this year and there could be more interesting investigations and personnel changes over the next few months. 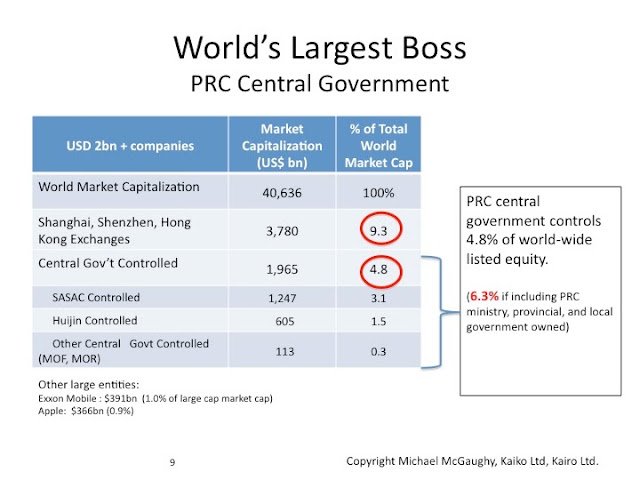 * Notes to graph above.  The last time I updated these numbers was in Fall 2012 so the slide is out of date. I've updated my numbers several times however the overall percentages do not change much.