Shenzhen: The World's Most Dynamic City

As this is being written in mid-November 2014 most stories on China and Hong Kong in the financial press are about the "through-train"  scheme that allows cross equity investments between Hong Kong and Shanghai.  There are a lot of articles that can be found on this by better writers so I won’t add my two cents about this except to say it’s about time.

While this is a very important step toward a more open China I think investors should not forget about Shenzhen, which in my opinion is much like Shanghai during the latter’s 1860s to 1940s heyday.

I believe that Shenzhen is the most dynamic city in the world’s most dynamic country. Foreign investors would be well-served to spend more time skipping across the border rather than just following the herd to Shanghai and Beijing.

Despite its freewheeling history and reputation, Shanghai is very much a government-led growth story.  Huang Yasheng and Qian Yi came to this conclusion in their co-written chapter titled “Is Entrepreneurship Missing in Shanghai” [1].   In it they noted that: “The story of Shanghai is one of two extremes.  At one extreme, Shanghai is viewed as a model of economic development and as a symbol of a rising and prosperous China. At the other extreme, as we have shown, Shanghai appears to lack private-sector entrepreneurship – a microeconomic mechanism widely regarded as important for economic growth, competition, job creation and innovation” (full document available here).

After China was liberated in 1949, one of the first things the new government did was to clean up what was then perceived to be the “whore of imperialism”[2]. They did a very thorough job and most of Shanghai’s famous entrepreneurial zeal either left or was extinguished. Many of the more successful entrepreneurs fled to HK, Taiwan or further (one of these is Sir YK Pao whose biography I reviewed and can be found here).

The World’s Most Dynamic City

Shenzhen’s growth in the last 25 years has been amazing.  It has evolved from a sleepy agricultural town of some 300,000 people when I first crossed the border in 1985 and is now a thriving metropolis of some 14m.

The catalyst for Shenzhen’s rapid development was its designation as a Special Economic Zone (SEZ) under Deng Xiaoping.  One of its key backers at the time was Xi Zhongxun, Xi Jinping’s father (my profile of XJP is here).

Leading the charge was Hong Kong’s internationally famous entrepreneurs who quickly relocated factories and manufacturing facilities.  Like Shanghai at the turn of the nineteenth century, Shenzhen initially grew from textile and other labor intensive manufacturing before expanding into trade and financial services.   Also like Shanghai, its openness to ideas and information brought new ways of thinking and information previously unavailable.


Shenzhen's population came from all over China for a variety of reasons. The most important being that there are more opportunities. Others come for the better weather, freer lifestyle, or youthful ramblings and ambition.

But opportunity and the possibility of a better life make up the key reason. This is analogous to the ‘old’ Shanghai where people from all parts of China – particularly from the lower Yangtze River area - moved into what was arguably China’s first cosmopolitan city.  There – as in Shenzhen today – they could mostly leave behind the prejudices that engulfed their traditional hometowns and make a new start in a young, vibrant and diverse city. 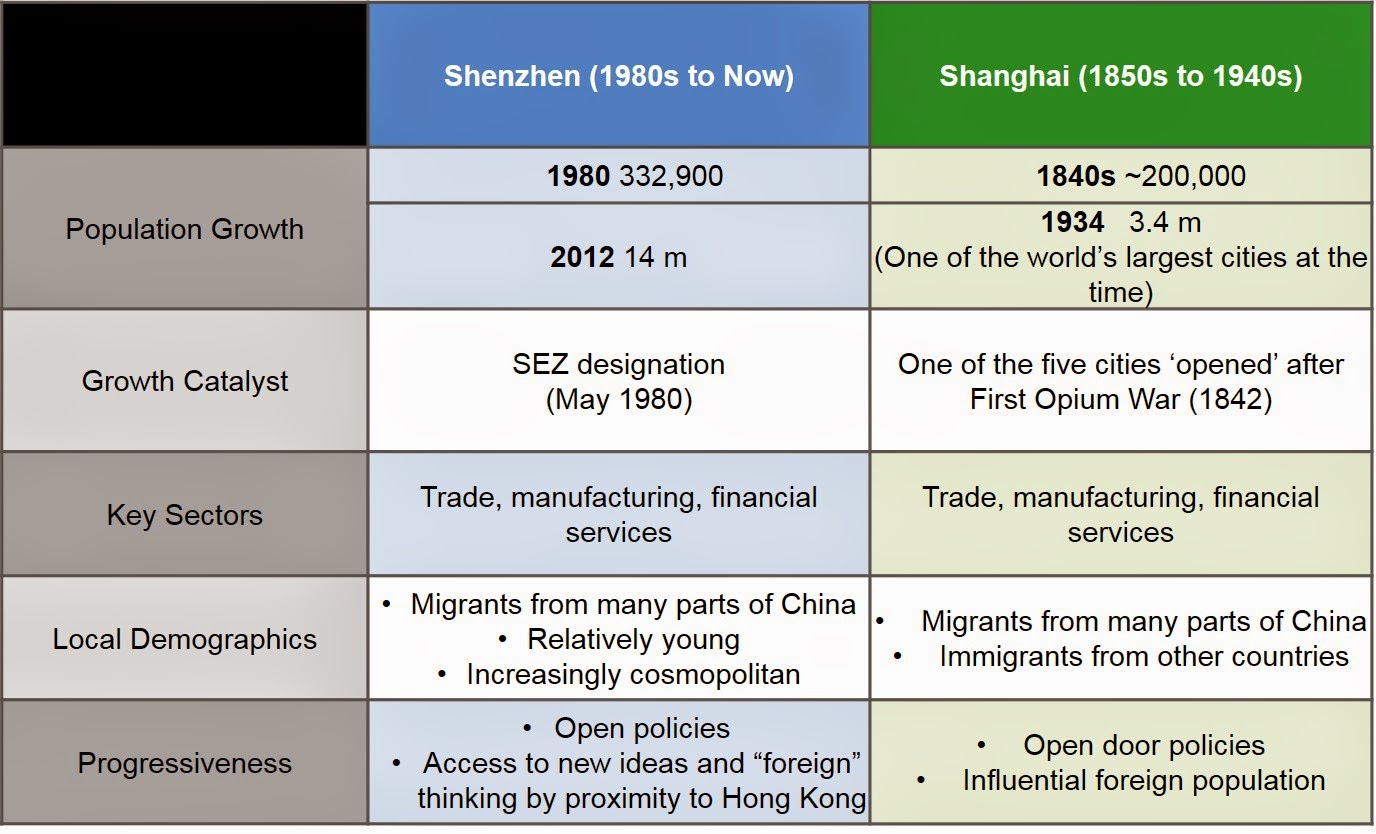 Like many new cities Shenzhen is reaching for the stars.  When it was built in 1985 Shenzhen’s International Trade Center was China's tallest building.  Later the Shun Hing Square become Asia's tallest when it was completed in 1996. The KK Finance Centre Plaza is now the tallest building in the city with 100 floors and a St. Regis hotel.  Its title will be short-lived as the 115-story Ping An International Finance Center is due to be completed in 2016 (from Wikipedia link here).

The border between Shenzhen and Hong Kong is coming down.  I’ve met several people who commute into Hong Kong’s financial district from their cheaper, bigger and probably more comfortable apartments in Shenzhen.  I’ve also met people who commute to Shenzhen on a regular basis as that’s where the growth and opportunities are.  This is especially true for young Hong Kong professionals that don’t want to uproot their families.

I think many foreigners also tend to overlook Shenzhen’s growing investment and financial sector.  In addition to being the home of Ping An and China Merchants Bank, there are numerous fund management, banks and other financial firms based in Shenzhen.

From personal experience several China focused fund managers have opened offices in Shenzhen to complement what they do in Hong Kong.  They are there not only because it is cheaper but also because it is actually China.  Which brings us to another topic.

Despite the growing links between the two, Shenzhen feels like it is China while HK maintains its separate system. Chinese nationals still need a passport and a permit to cross the narrow border into HK.  In Shenzhen one gets the pulse of modern China that eludes Hong Kong’s more international and ‘sophisticated’ population (or stuck-up depending on the circumstance).

But it is not the big companies that really contribute to growth and progress as it is the small and medium ones that are developing the next big thing.

The Shenzhen stock market seems to reflect the city’s youthful spirit and aspirations.  It has three ‘boards’ with different listing requirements: the Main Board, SME (small medium sized enterprises), and ChiNext (even smaller and younger companies).

Altogether there are just over 1,600 companies listed in Shenzhen compared to 960 in Shanghai.  The average size of companies in Shanghai is much larger and includes some of the largest companies in the world such as China’s large SOE banks, telcos, and petroleum companies.  These super large SOEs account for close to 30% of Shanghai's total market capitalization.

However none of the five largest companies listed in Shenzhen are majority owned by the government.  Three have a distributed shareholder structure with no single entity controlling more than 20%.  The two privately-held companies – BYD and Midea – are owned and controlled by individuals.

Shenzhen’s listcos are not cheap however.  Its main board now trades at an average PE of 21x.  The SME and Chinext are even more expensive at 41x and 68x respectively.  It seems that investors are expecting tremendous growth from the smaller companies listed in Shenzhen.

Equity investors should tread carefully.  While there’s a lot going on just north of my Hong Kong base, valuations in Shenzhen are scary.  At 20x to 60x earnings much if not all of a firm’s growth is likely to already be reflected in its valuation.  Shenzhen is very dynamic, but no matter how dynamic things are, paying too much for any stream of future cash flows runs the risk of a permanent loss of capital.

And let’s not forget the skyscraper curse.  While not scientific its uncanny how economic decline often follows when tall, record-breaking building are announced or built. The Empire State Building was completed on the eve of the Great Depression, the Petronas Towers were finished just as the Asian Financial Crisis unfolded, and the Burj Khalifa was unveiled about the same time as Dubai/UAE economy faltered in 2010 (more info here).

Shenzhen has a lot going for. It is the headquarters of some of China's largest private companies. It has a lots of start ups and available funding.  Its population is relatively young and mostly composed of migrants from other parts of China.  Even its stock market has outperformed Shanghai year-to-date.

While its equities are expensive investors could do worse than hopping across the border. With some 1,600 companies to choose from, I suspect there are many diamonds yet to be found.

Shanghai is not dead by any means, but in my mind it is more of a representation of China’s past.  Shenzhen is China's dynamic, private and entrepreneurial future.