Bangkok - Changing and Staying the Same

Thailand is, and is not, changing.

That is my impression after a three-day trip to Bangkok to celebrate a friends 50th.  My first trip to Thailand was in 1986 and I've been going back every one-to-three years since.  This was my first time to Thailand in almost exactly two years when I was doing on-the-ground research for Inside Corporate ASEAN. My list of publications can be found here: http://michaelmcgaughy.blogspot.hk/2012/02/publication-list.html

Changing.  Bangkok for the first time feels like a real, first-world cosmopolitan city.  In the past it has always stuck me as a sprawling city in a developing country.  This time the night drive into the city from the airport yielded an urbane skyline, fast expressways and drivers that (mostly) stayed in their lanes. Later in the weekend a crowded BTS and fashionable shopping mall added to this feeling. Dinner, drinks and a terrace view of a concrete jungle reinforced it.

Staying the Same.  However in some ways Bangkok has not changed. 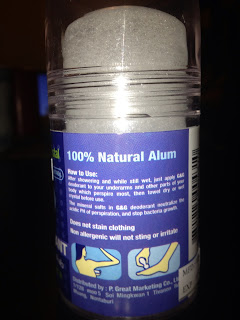 The last point is actually the purpose of this post.

The product is called G&G Body Deodorant.  It is for both underarms and feet. Basically a combination of Sure and Odor Eaters.

It was the only option at the supermarket so I gave it a try.  After a few days in a not-so-hot-Bangkok I found that it worked well.

At least for my upper body.  I still have not tried it on my feet. 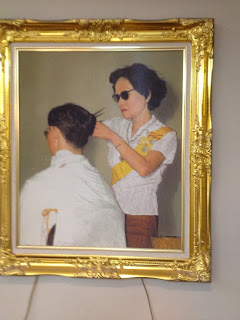 The second picture is also from the trip.  It shows the King of Thailand getting haircut from his mother.  In Thailand virtually every retail business and office has a picture of the the king or other members of the royal family centrally displayed.  This was hanging at the Nonglingchee barber shop I tried. Very appropriate.